Mindy Starns Clark is the bestselling author of numerous books, both fiction and nonfiction, including Whispers of the Bayou, The House That Cleans Itself, and the #1-ranked The Amish Midwife. She has received numerous honors, including two Christy Awards and an RT Book Reviews' Career Achievement Award. Mindy and her husband, John, live near Valley Forge, Pennsylvania, and have two grown daughters.
Visit Mindy's Amazon page - (paid link).

Whispers of the Bayou

Swept away from Louisiana bayou country as a child, Miranda Miller is a woman without a past. She has a husband and child of her own and a fulfilling job in a Manhattan museum, but she also has questions - about the tragedy that cut her off from family and caused her to be sent away and about those first five years of her life, which were erased from her memory entirely.
Summoned to the bedside of Willy Pedreaux, the old caretaker of her grandparents' antebellum estate, Miranda goes back to Louisiana at last, hoping to learn the truths of her past and receive her rightful inheritance. But Willy's premature death plunges Miranda into a nightmare of buried secrets, priceless treasure, and unknown enemies.
Follow one woman's search through the hidden rooms of a bayou mansion, the enigmatic snares of an ancient myth, and the all-consuming quest for a heart open enough for love - and for God.
"Intricately plotted and exquisitely detailed, Clark's latest novel is fantastic. There's a gothic feel throughout, and the outcome of the mystery is fascinating.... Mystery lovers should move this to the top of their purchase lists." (RT Book Reviews)
Mindy Starns Clark is the best-selling author of more than 30 books, both fiction and nonfiction, and has received numerous honors, including Christy Awards, Inspirational Readers Choice Awards, and RT Book Review's Career Achievement Award.
©2008 Mindy Starns Clark (P) 2018 Mindy Starns Clark

Under the Cajun Moon

What secrets can be found by the light of the Cajun moon? New Orleans may be the "Big Easy", but nothing about it was ever easy for international business etiquette expert Chloe Ledet. She moved away years ago, leaving her parents and their famous French Quarter restaurant behind. But when she hears that her father has been shot, she races home to be by his side and to handle his affairs, only to learn a long-hidden secret that changes everything she knew to be true about herself and her family.
Framed for murder, Chloe and a handsome Cajun stranger must search for a priceless treasure, one whose roots weave through the very history of Louisiana itself. But can Chloe depend on the mysterious man leading her on this cat-and-mouse chase into the heart of Cajun country? Or by trusting him, has she gone from the frying pan into the fire? This exciting standalone from best-selling inspirational author Mindy Starns Clark is full of Cajun mystery, hidden dangers, and the glow of God's unending grace.
©2009 Mindy Starns Clark (P) 2009 Oasis 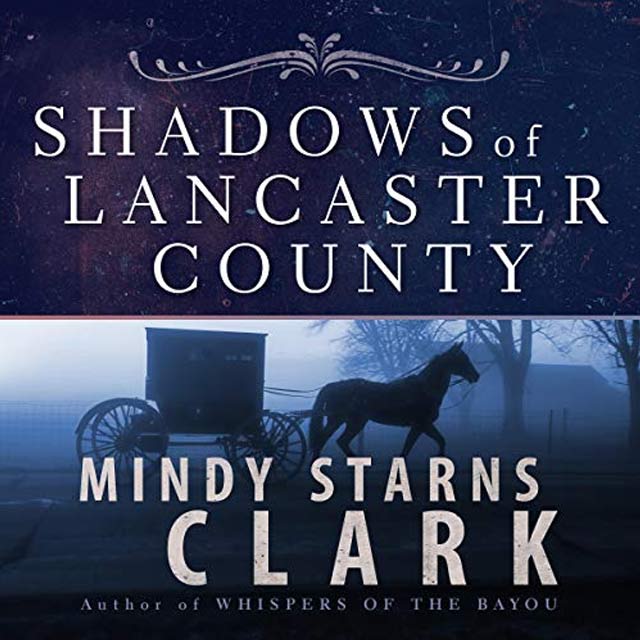 Anna Bailey thought she left the tragedies of the past behind when she took on a new identity and moved from Pennsylvania to California. But now that her brother has vanished and his wife is crying out for help, Anna knows she has no choice but to come out of hiding, go home, and find him. Back in Lancaster County, Anna follows the high-tech trail her brother left behind, a trail that leads from the simple world of Amish farming to the cutting edge of DNA research and gene therapy.
During the course of her pursuit, Anna soon realizes that she has something others want, something worth killing for. In a world where nothing is as it seems, Anna seeks to protect herself, find her brother, and keep a rein on her heart despite the sudden reappearance of Reed Thornton, the only man she has ever loved.
Following up on her extremely popular gothic thriller, Whispers of the Bayou, Mindy Starns Clark offers another suspenseful standalone mystery, one full of Amish simplicity, dark shadows, and the light of God's amazing grace.
“Top Pick! Clark delivers another fascinating novel that readers will not want to put down. There is something here for everyone - mystery, romance, details of Amish life, a historical puzzle and cutting-edge medical technology…This superbly plotted book is not to be missed!" (RT BookReviews.com)
“Clark weaves a web of characters and events that will draw in Christian suspense fans.” (Publishers Weekly)
©2009 Mindy Starns Clark (P) 2020 Mindy Starns Clark 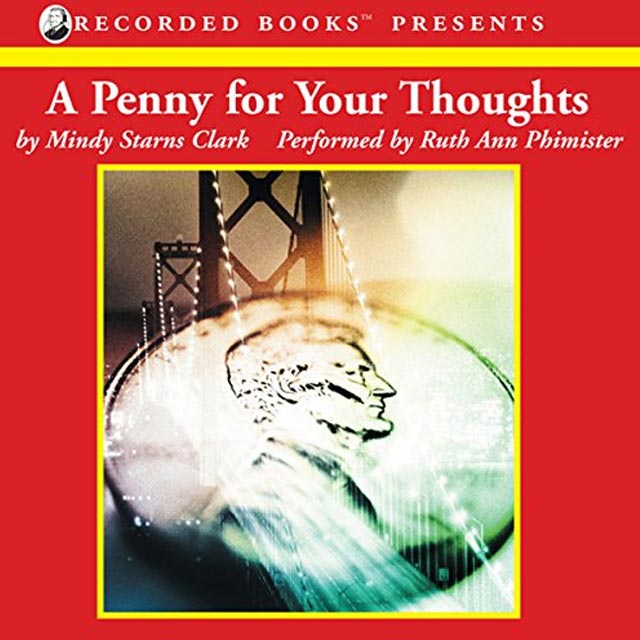 A Penny for Your Thoughts

Mindy Starns Clark delivers a unique spin on inspirational fiction with her Million Dollar Mystery series featuring private investigator Callie Webber. When philanthropist Wendell Smythe is murdered shortly after Callie meets him, she is forced to investigate. Soon she discovers that his family is hiding a few unsightly secrets, and motives for murder are abundant. Only by turning to God can Callie hope to solve this mystery.
Don't miss other titles in The Million Dollar Mysteries series.
©2002 Mindy Starns Clark (P) 2003 Recorded Books, LLC

Mindy Starns Clark is an ECPA best-selling author. Following A Penny for Your Thoughts, this is the second installment in her Million Dollar Mystery series. Callie returns home to help a young woman, Shayna, prepare for a new job. But they soon discover the dead body of Shayna’s boyfriend. Only by turning to God for help can Callie solve this deadly mystery.
Don't miss other titles in The Million Dollar Mysteries series.
©2003 Mindy Starns Clark (P) 2003 Recorded Books, LLC

A Dime a Dozen

ECPA best-selling author Mindy Starns Clark continues her Million Dollar Mystery series with A Dime a Dozen. Private investigator Callie Webber finally meets her boss, and is immediately smitten. But the romance must wait until she solves another mystery, this time involving her late husband’s family. Callie can only hope that her prayers will be answered.
©2003 Mindy Starns Clark (P) 2004 Recorded Books, LLC 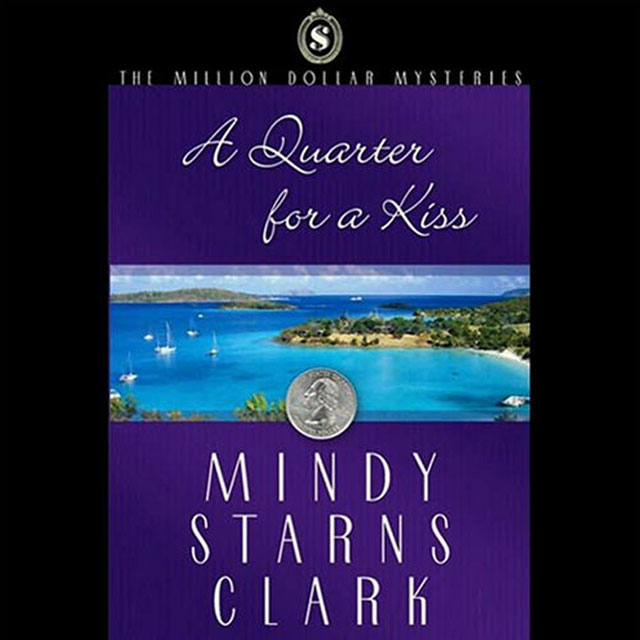 A Quarter for a Kiss

In this riveting installment, Callie Webber's budding romance is interrupted by attempted murder. Her mentor, Eli, has been shot, a sniper's bullet piercing his chest. Rushing to Eli's aid, Callie finds herself on the island of St. John, where she puts her P.I. license to good use. A little digging into Eli's past uncovers his secret connections to the NSA and to a mysterious woman who was supposed to be dead.
ECPA (Evangelical Christian Publishers Association) best-selling author Mindy Starns Clark has captured the hearts and minds of countless fans with her Million Dollar mysteries.
Don't miss other titles in The Million Dollar Mysteries series.
©2004 Mindy Starns Clark (P) 2006 Recorded Books 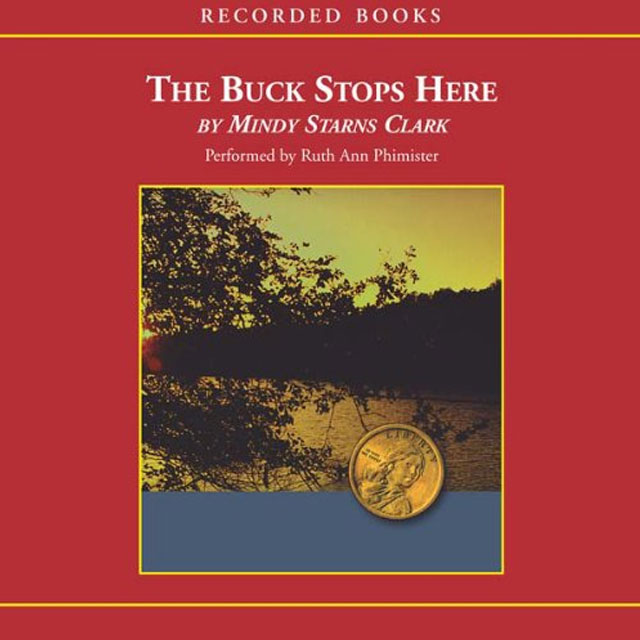 Ever since her husband was killed in a boating accident several years ago, Callie has immersed herself in work. But when she overhears a conversation that implicates her boss, Tom, in the death, she questions everything she has been told about the accident.
When Callie confronts Tom, he informs her that his hands are tied by the National Security Agency and he can tell her nothing. Despite the secrecy surrounding Tom and the NSA, Callie decides to find out for herself exactly what is going on and how Tom may have been involved in her husband's death. Using her investigative skills, Callie throws herself into the most important mystery she has ever attempted to solve.
Will their affection be able to stand the strain? And what was God's plan in bringing Tom and Callie together - marriage or merely answers for her questions about Bryan's death?The Million Dollar Mystery series thrills millions of readers with its exciting combination of suspense and inspiration.
Don't miss other titles in The Million Dollar Mysteries series.
©2004 Mindy Starns Clark (P) 2006 Recorded Books, LLC