Elizabeth Camden is a research librarian at a small college in central Florida. Her novels have won the coveted RITA and Christy Awards. She has published several articles for academic publications and is the author of four nonfiction history books. Her ongoing fascination with history and love of literature have led her to write inspirational fiction. Elizabeth lives with her husband near Orlando, Florida.
Visit Elizabeth's Amazon page 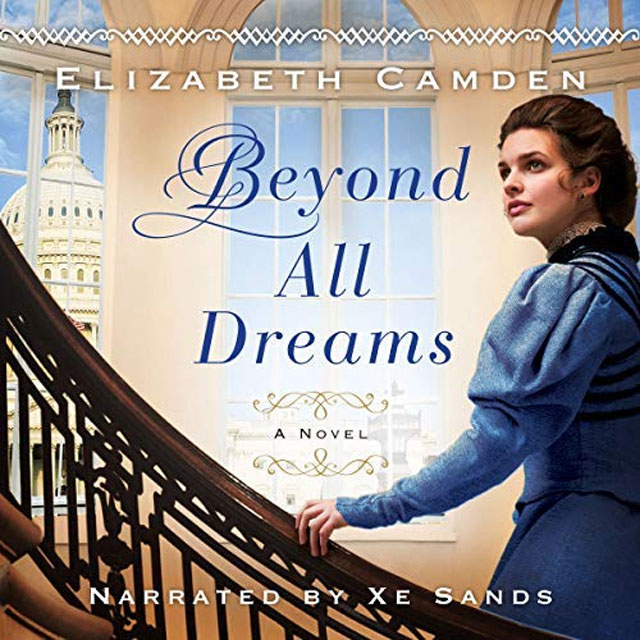 Anna O'Brien leads a predictable and quiet life as a map librarian at the illustrious Library of Congress until she stumbles across the baffling mystery of a ship disappeared at sea. Thwarted in her attempts to uncover information, her determination outweighs her shyness and she turns to a dashing congressman for help.
Luke Callahan was one of the nation's most powerful congressmen before his promising career was shadowed in scandal. Eager to share in a new cause and intrigued by the winsome librarian, he joins forces with Anna to solve the mystery of the lost ship. Opposites in every way, Anna and Luke are unexpectedly drawn to each other despite the strict rules forbidding Anna from any romantic entanglements with members of Congress.
From the gilded halls of the Capitol where powerful men shape the future of the nation, to the scholarly archives of the nation's finest library, Anna and Luke are soon embroiled in secrets much bigger and more perilous than they ever imagined. Is bringing the truth to light worth risking all they've ever dreamed for their futures? ©2015 Dorothy Mays (P) 2018 Two Words Publishing LLC 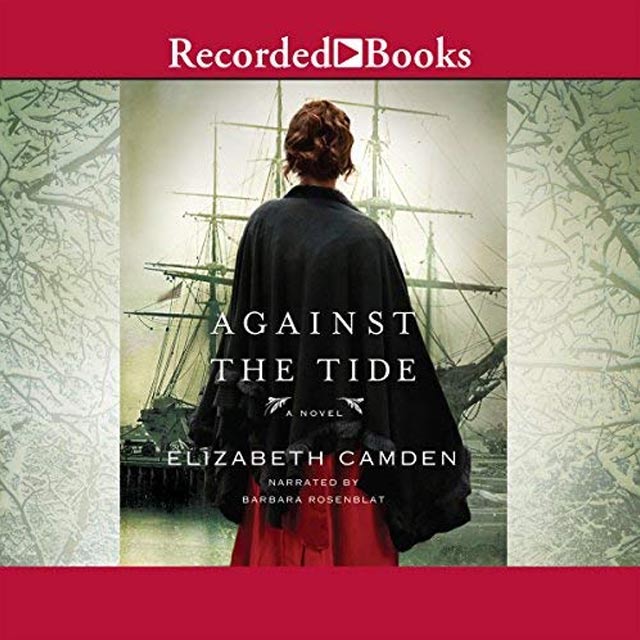 As a child, Lydia Pallas became all too familiar with uncertainty when it came to the future. Now, she's finally carved out a perfect life for herself - a life of stability and order with no changes, surprises, or chaos of any kind. She adores her apartment overlooking the bustling Boston Harbor, and her skill with languages has landed her a secure position as a translator for the U.S. Navy. However, it is her talent for translation that brings her into contact with Alexander Banebridge, or "Bane", a man who equally attracts and aggravates her. When Bane hires Lydia to translate a seemingly innocuous collection of European documents, she hesitantly agrees, only to discover she is in over her head.
Just as Bane's charm begins to win her over, Lydia learns he is driven by a secret campaign against some of the most dangerous criminals on the East Coast, compelled by his faith and his past. Bane forbids any involvement on Lydia's part, but when the criminals gain the upper hand, it is Lydia on whom he must depend. ©2012 Elizabeth Camden (P) 2012 Recorded Books 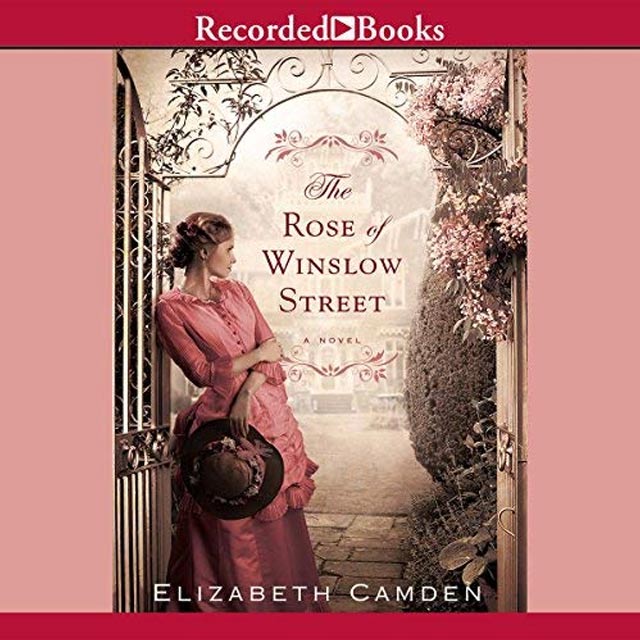 The Rose of Winslow Street

Elizabeth Camden’s inspirational fiction takes listeners on an unparalleled emotional journey.
In The Rose of Winslow Street, Libby Sawyer and her father return from summer vacation to find another family living in their home. Widower Michael Dobrescu brought his family all the way from Romania to stake a decades-old claim on their house, and he has no plans to leave. As a contentious legal battle drags on, Libby finds herself drawn to Michael and his mysterious past. But she’ll soon have to choose between her family and a man with decidedly unclear intentions.
©2012 Elizabeth Camden (P) 2012 Recorded Books 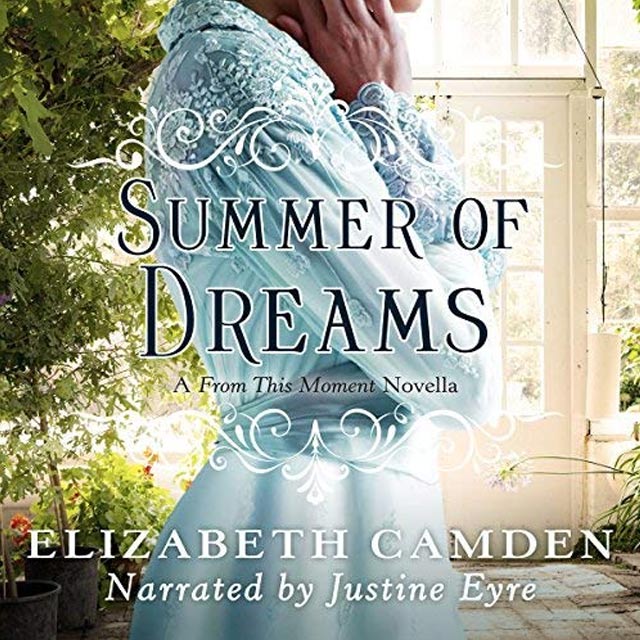 From This Moment, Book .5

The daughter of a powerful army general, Evelyn White dreams of attending college and vows she will never marry a man in uniform... which is why West Point cadet Clyde Brixton presents a problem. Clyde's brilliance in the new field of electrical power has him poised for a promising career in the Army's Corps of Engineers, but his penchant for racking up demerits threatens his chances for graduation.
Evelyn and Clyde feel instant attraction toward one another as they spend one magical summer together. As their lives become more entwined, their friend Romulus begins to come undone. When faced with helping Romulus at the expense of his own future, which one will Clyde choose? And when nothing turns out the way Evelyn planned, where will that leave her own future?
©2016 Dorothy Mays (P) 2018 Two Words Publishing LLC 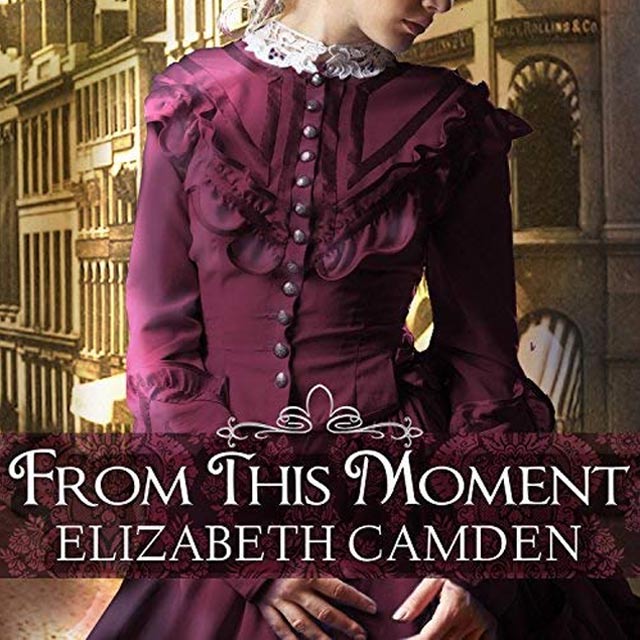 From This Moment, Book 1

Romulus White has tried for years to hire illustrator Stella West for his renowned scientific magazine. She is the missing piece he needs to propel his magazine to the forefront of the industry. But Stella abruptly quit the art world and moved to Boston with a single purpose: to solve the mysterious death of her beloved sister.
Romulus, a man with connections to high society and every important power circle in the city, could be her most valuable ally. Sparks fly the instant Stella and Romulus join forces, and Romulus soon realizes the strong-willed and charismatic Stella could disrupt his hard-won independence.
Can they continue to help each other when their efforts draw the wrong kind of attention from the powers-that-be and put all they've worked for at risk?
©2016 Dorothy Mays (P) 2016 Tantor 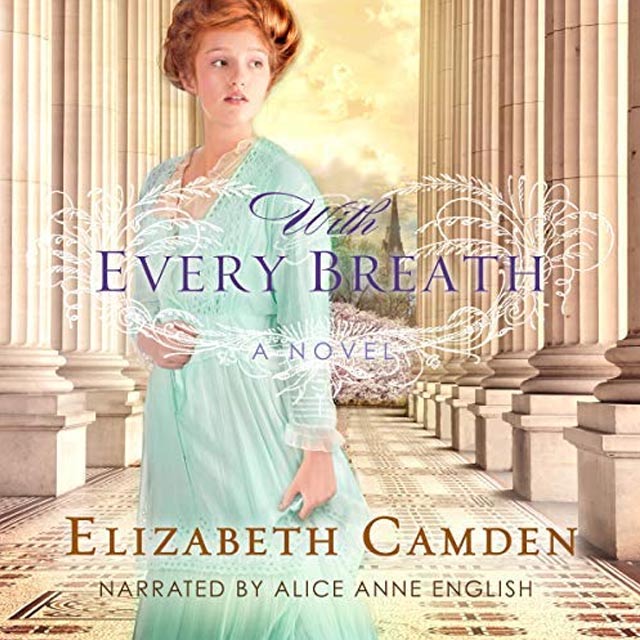 "Camden takes readers on a breathless ride..." (RT Book Reviews)
In the shadow of the nation's capital, Kate Livingston's respectable life as a government worker is disrupted by an encounter with the insufferable Trevor McDonough, the one man she'd hoped never to see again. A Harvard-trained physician, Trevor never showed the tiniest flicker of interest in Kate, and business is the only reason he has sought her out now.
Despite her misgivings, Kate agrees to Trevor's risky proposal to join him in his work to find a cure for tuberculosis. As Kate begins to unlock the mysteries of Trevor's past, his hidden depths fascinate her. However, a shadowy enemy lies in wait, and Trevor's closely guarded secrets are darker than she ever suspected.
As revelations from the past threaten to destroy their careers, their dreams, and even their lives, Trevor and Kate find themselves in a painfully impossible situation. With everything to lose, they must find the strength to trust that hope and love can prevail over all. ©2014 Dorothy Mays (P) 2018 Two Words Publishing LLC 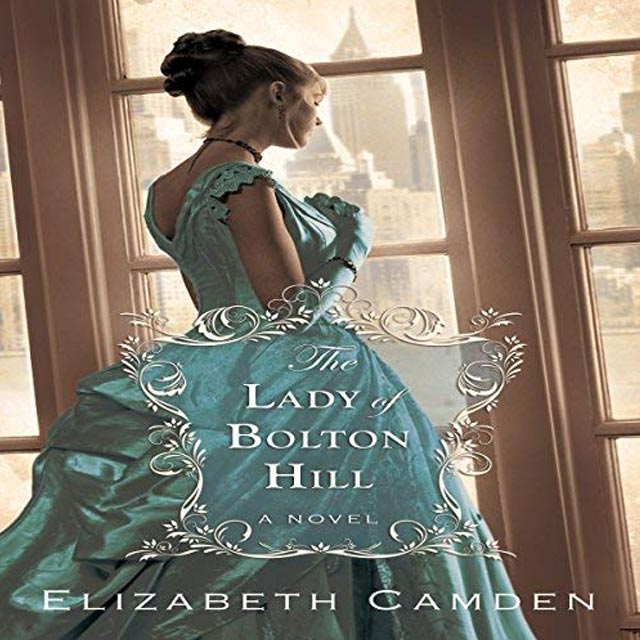 The Lady of Bolton Hill

Female journalists are rare in 1879, but American born Clara Endicott has finally made a name for herself with her provocative articles championing London's poor. When the backlash from her work forces a return home to Baltimore, Clara finds herself face to face with a childhood sweetheart who is no longer the impoverished factory worker she once knew. In her absence, Daniel Tremain has become a powerful industry giant and Clara finds him as enigmatic as ever. However, Daniel's success is fueled by resentment from past wounds and Clara's deeply held beliefs about God's grace force Daniel to confront his own motives. When Clara's very life is endangered by one of Daniel's adversaries, they must face a reckoning neither of them ever could have foreseen.
©2011 Dorothy Mays (P) 2017 Dorothy Mays

To the Farthest Shores

It has been six years since army nurse Jenny Bennett's heart was broken by a dashing naval officer. Now Lieutenant Ryan Gallagher has abruptly reappeared in her life at the Presidio army base, but refuses to discuss the inexplicable behavior that destroyed their happiness.
Ryan is in an impossible situation. One of the few men in the world qualified to carry out a daring assignment, he accepted a government mission overseas that caused his reputation to be destroyed and broke the heart of the only woman he ever loved. Honor-bound never to reveal where he had been during those six years, he can't tell Jenny the truth or it will endanger an ongoing mission and put thousands of lives at risk.
Although Ryan thinks he may have finally found a solution, he can't pull it off on his own. Loyalty to her country compels Jenny to help, but she never could have imagined the intrigue she and Ryan will have to face or the lengths to which they will have to go to succeed. ©2017 Dorothy Mays (P) 2017 Tantor 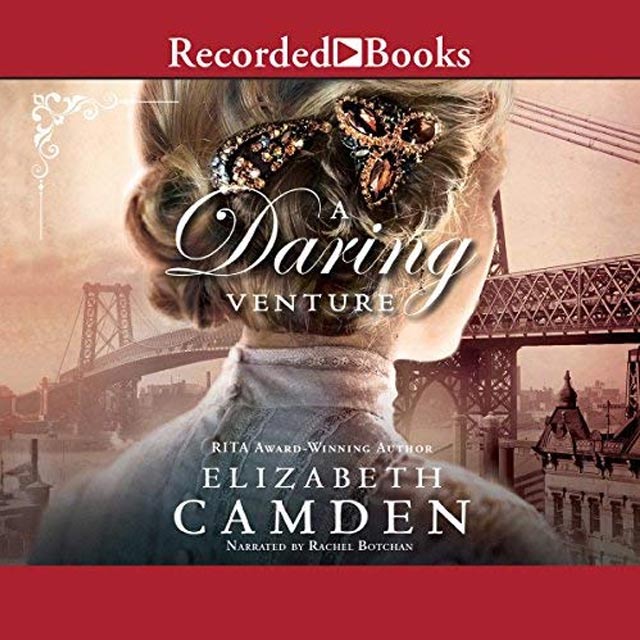 Telegraph operator Lucy Drake is a master of Morse code, but the presence of Sir Colin Beckwith at a rival news agency puts her livelihood at risk. Despite their rivalry, Lucy realises Colin's connections could be just what her family needs to turn the tide of their long legal battle over their stolen fortune.
When she negotiates an unlikely alliance with him, neither of them realises how far the web of treachery they're wading into will take them.
©2017 Dorothy Mays (P) 2017 Recorded Books Inc 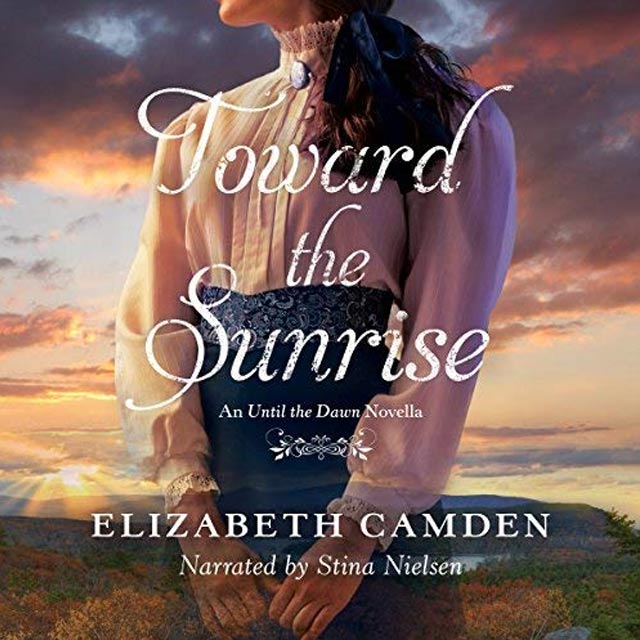 An Until the Dawn Novella, Book 0.5

Julia Broeder is only six months shy of graduating from the Women's Medical College of Pennsylvania when one small decision spirals out of control and results in her expulsion. Hoping to travel the world as a missionary doctor, her only choice is to return back home...or throw herself upon the mercy of Ashton Carlyle.
Formal and straitlaced, Ashton is not pleased to see an expelled Julia arrive at his Manhattan office. His position as an attorney for the Vandermark family's world-famous shipping empire entails taking care of the Broeders, longtime employees of the Vandermarks. But Ashton has no intention of using his employer's resources in defense of Julia's impulsive and reckless actions.
What Ashton does not expect are a scathing reprimand from none other than the Vandermark family patriarch and the bewildering resistance from Julia herself when he's forced to change his tune. At an impasse, Ashton and Julia are unprepared for the revelations that arise or the adventure that awaits them.
In this novella, award-winning novelist Elizabeth Camden introduces listeners to the world of the grand Hudson River Valley estate Dierenpark and the enigmatic Vandermark family. Includes an extended preview of Until the Dawn, Camden's full-length Dierenpark novel. ©2015 Dorothy Mays (P) 2018 Two Words Publishing LLC

Until the Dawn, Book 1

Top-Notch Dramatic Historical Romance from a Rising Star
A volunteer for the newly established Weather Bureau, Sophie van Riijn needs access to the highest spot in her village to report the most accurate readings. Fascinated by Dierenpark, an abandoned mansion high atop a windswept cliff in the Hudson River Valley, Sophie knows no better option despite a lack of permission from the absent owners.
The first Vandermark to return to the area in 60 years, Quentin intends to put an end to the shadowy rumors about the property that has brought nothing but trouble upon his family. Ready to tear down the mansion, he is furious to discover a local woman has been trespassing on his land. Instantly at odds, Quentin and Sophie find common ground when she is the only one who can reach his troubled son.
There's a light within Sophie that Quentin has never known, and a small spark of the hope that left him years ago begins to grow. But when the secrets of Dierenpark and the Vandermark family history are no longer content to stay in the past, will tragedy triumph, or can their tenuous hope prevail? ©2015 Dorothy Mays (P) 2015 Recorded Books