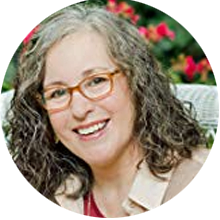 Cindy Woodsmall is a New York Times, CBA, ECPA, and USA Today best-selling author who has written twenty-two (and counting!) works of fiction and one of nonfiction. Cindy has been featured on ABC Nightline and on the front page of the Wall Street Journal,and has worked with National Geographic on a documentary concerning Amish life. Wall Street Journal listed Cindy as the one of the top three most popular authors of Amish fiction.
She's won Fiction Book of the Year, Reviewer's Choice Awards, Inspirational Reader's Choice Contest, as well as one of Crossings' Best Books of the Year. She's been a finalist for the prestigious Christy, Rita, and Carol Awards, Christian Book of the Year, and Christian Retailers Choice Awards. Cindy and her husband reside near the foothills of the North Georgia Mountains in their now empty nest.
Click here to visit Cindy's Amazon page 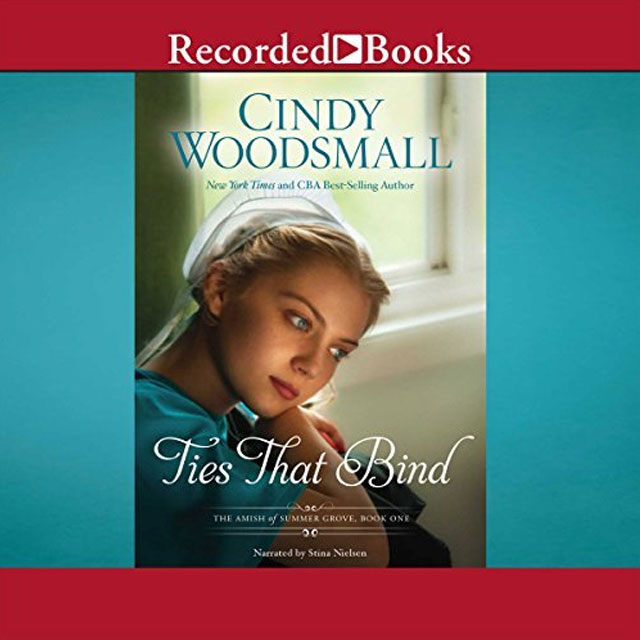 Twenty-year-old Ariana Brenneman loves her family and the Old Ways. She has two aspirations: open a café in historic Summer Grove to help support her family's ever-expanding brood and keep any other Amish from being lured into the Englisch life by Quill Schlabach. Five years ago Quill and her dear friend, Frieda, ran off together, and Ariana still carries the wounds of that betrayal. When she unexpectedly encounters him, she soon realizes he has plans to help someone else she loves leave the Amish.
Despite how things look, Quill's goal has always been to protect Ariana from anything that may hurt her, including the reasons he left. After returning to Summer Grove on another matter, he unearths secrets about Ariana and her family that she is unaware of. His love and loyalty to her beckons him to try to win her trust and help her find a way to buy the café - because when she learns the truth that connects her and a stranger named Skylar Nash, Quill knows it may upend her life forever.
©2015 Cindy Woodsmall (P) 2015 Recorded Books 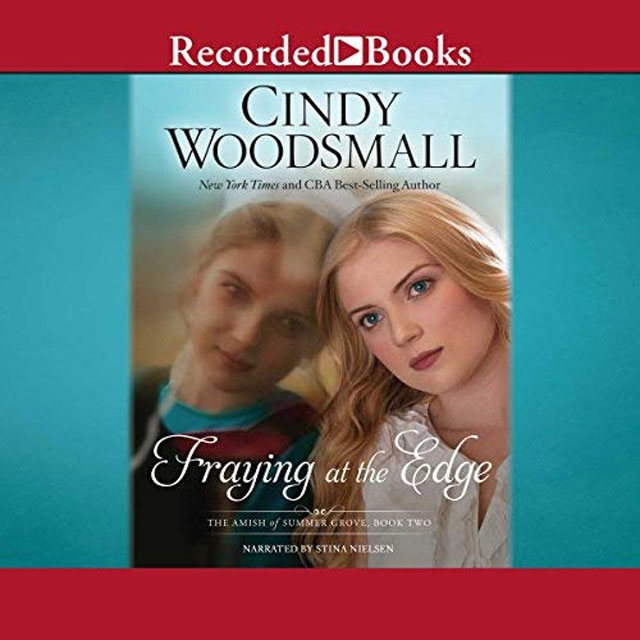 Fraying at the Edge 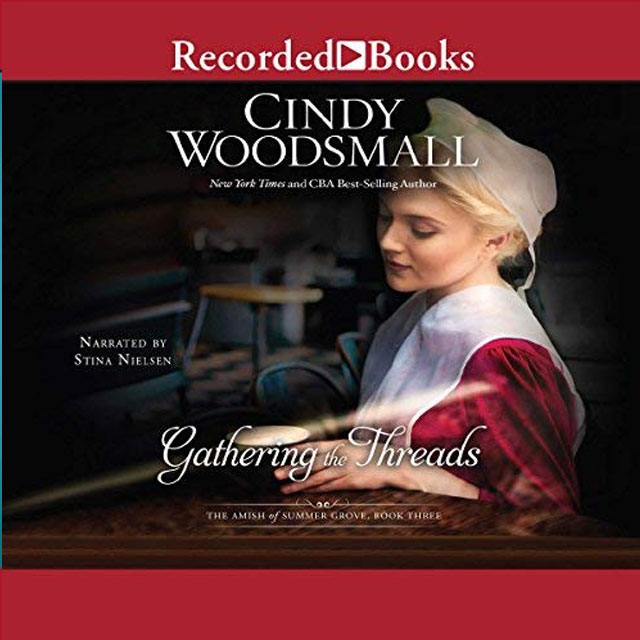 The third and final book in the Amish of Summer Grove series, from New York Times and CBA best-selling novelist Cindy Woodsmall, brings an Old Order Amish young woman and an Englischer woman who were switched at birth full circle, as they decide where their futures will lie.
After several months living out in the world with her birth family, Ariana Brenneman is back living in the Old Amish community that she grew up in. The shock of discovering she and Skylar Nash were switched at birth has not worn off, but both young women are regaining their footing and trying to determine what lies ahead - the Amish life or an Englischer one? Ariana must also decide if Quill Schlabach will play a role in hers or not.
©2017 Cindy Woodsmall (P) 2017 Recorded Books

As the Tide Comes In

CINDY WOODSMALL and ERIN WOODSMALL
A New York Times best-selling author releases her first southern novel, a Steel Magnolias-meets-Sweet Home Alabama story set on St. Simons Island.
After losing two loved ones in a devastating tornado and suffering a head injury, Tara Abbott flees to St. Simons Island, where her disorientation causes the lines between imagination and reality, past and present to blur. There she encounters island residents Julep Burnside, Luella Ward, Sue Beth Manning, and Dell Calhoun - The Glynn Girls - who have been friends since Bible camp, 40 years earlier. When Julep's son Gavin identifies a troubled soul in need of help, can the Glynn Girls guide Tara back to herself?
©2018 Cindy Woodsmall (P) 2018 Recorded Books 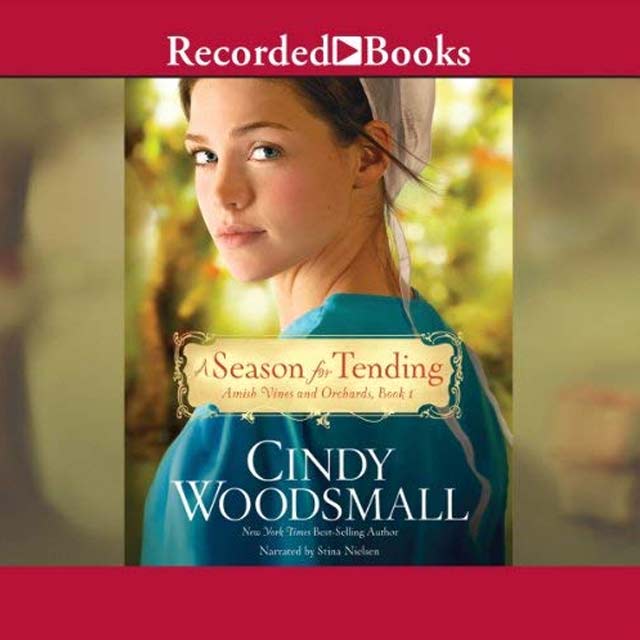 A Season for Tending

Old Order Amish Rhoda Byler’s unusual gift and her remarkable abilities to grow herbs and berries have caused many to think her odd. As rumors mount that Rhoda’s "gift" is a detriment to the community, she chooses isolation, spending her time in her fruit garden and on her thriving canning business.
Miles away in Harvest Mills, Samuel King struggles to keep his family’s apple orchard profitable. As the eldest son, Samuel, farms with his brothers, the irrepressible Jacob and brash Eli, while his longtime girlfriend, Catherine, remains hopeful that Samuel will marry her when he feels financially stable. Meanwhile, Samuel’s younger sister, Leah, is testing all the boundaries during her Rumschpringe, and finds herself far from home in Rhoda’s garden after a night of partying gone badly. But Leah’s poor choices serve as a bridge between Rhoda and the King family when a tragic mistake in the orchard leaves Samuel searching for solutions.
Rhoda’s expertise in canning could be the answer, but she struggles with guilt over the tragic death of her sister and doesn’t trust herself outside her garden walls. As the lines between business, love, and family begin to blur, can Rhoda finally open up to a new life? And what effect will this odd, amazing woman have on the entire King family?
©2012 Cindy Woodsmall (P) 2012 Recorded Books 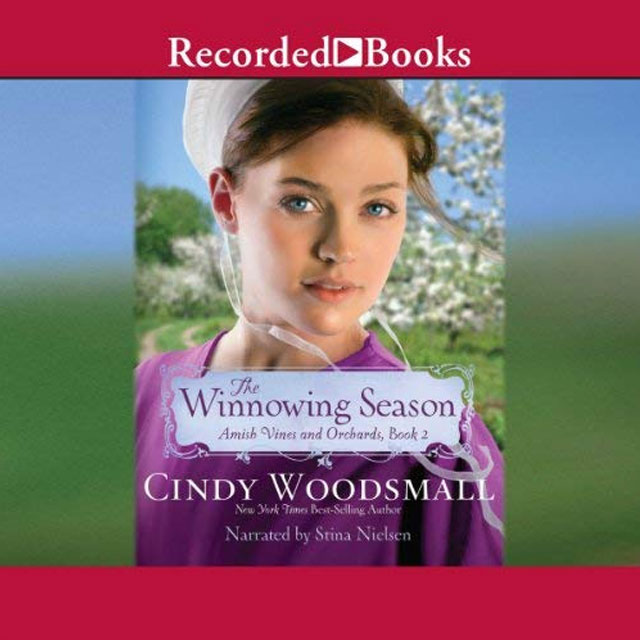 Best-selling author Cindy Woodsmall casts light into the lives of book lovers everywhere with her heartfelt tales of Amish life. After a tornado tears through Kings' Orchard, Rhoda, Samuel and Jacob hope to reestablish their Old Order Amish community in Maine. Jacob loves Rhoda and wants nothing more than to help them build this new life, but demons from his past, as well as Samuel's poor business decisions, threaten to undercut their hopes.
©2013 Cindy Woodsmall (P) 2013 Recorded Books 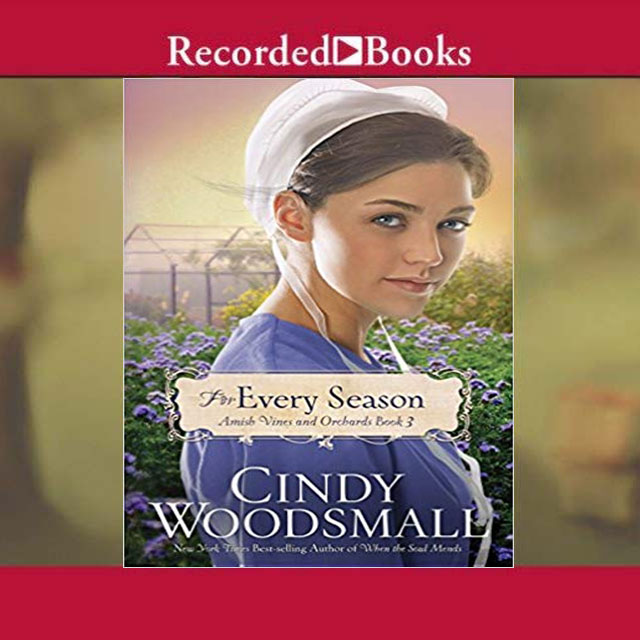 Working hard to develop a new Amish community outside of Unity, Maine, Rhoda Byler is fully committed to rehabilitating an orchard with business partner Samuel King. But an impulsive decision has created an unexpected strain in her relationship with her beau, Samuel’s brother, Jacob, threatening plans for the orchard.
Amidst mounting tension in matters of the heart and business, Rhoda finds that this fledging settlement feels like the home she has always longed for, and she begins to embrace the God-given, heightened intuition that has always felt like a burden to her. She longs for Jacob to fully be free of his past, so they can work towards the future together. But as Rhoda uses her gift to unpack an old secret with her Englisch neighbors, it is not her beau but an unlikely ally that cheers her on.
With the orchard on shaky ground and Jacob’s plans in question, Rhoda is determined to see things through to harvest. But can she trust her insight to direct her path in matters of the heart?
©2013 Cindy Woodsmall (P) 2013 Recorded Books 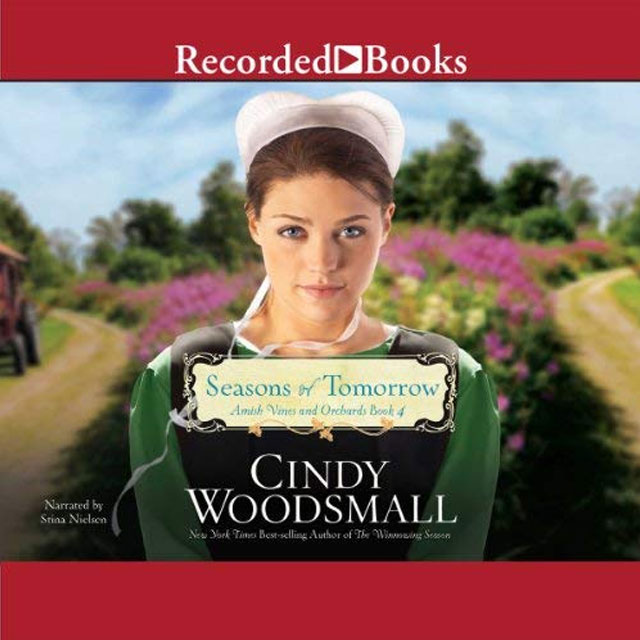 As love restores Rhoda, a sudden tragedy is the test of faith she never saw coming. More settled in her heart than ever before, Rhoda Byler feels a newfound confidence living in the Old Order Amish settlement she helped establish in Orchard Bend, Maine.
Though it has been almost a year since one brother left, Rhoda is happy to be working alongside the other brother as they tend and nurture the settlement' s orchard. Time has helped to heal Rhoda's wounds, and she finds that even her unusual gift of profound intuition is less of a burden as she continues to seek God' s wisdom and purpose for her life.
But when an Englischer friend' s grandchild is in extreme danger, can Rhoda' s gift make a difference or will it simply be a catalyst to another season of doubt and misunderstanding? As she resolves to stay on course, suddenly a shocking tragedy challenges the young settlement like never before, threatening to uproot Rhoda' s peace and the future of everything she holds dear.
©2014 Cindy Woodsmall (P) 2014 Recorded Books 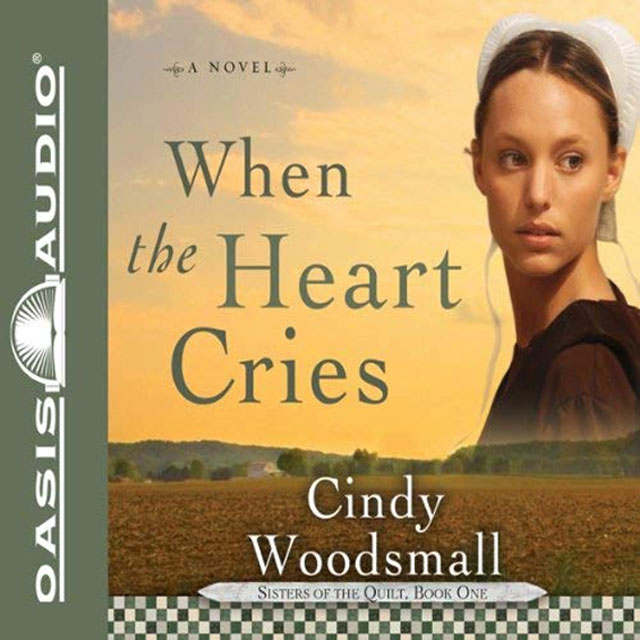 Sisters of the Quilt, Book 1

When the Heart Cries

Despite being raised in a traditional Old Order Amish family, 17-year-old Hannah Lapp desires to break with custom, forgo baptism into the faith, and marry outside the cloistered community. She's been in love with Mennonite Paul Waddell for three years, and before returning to college for his senior year, Paul asks Hannah to be his wife. Hannah accepts, aware that her marriage will change her relationship with her family forever.
On the evening of their engagement, tragedy strikes and in one unwelcome encounter, all that Hannah has known and believed is destroyed. As she finds herself entangled in questions that the Old Ways of her people cannot answer, Hannah faces the possibility of losing her place in her family, in her community - and in the heart of the man she loves. Listen to all of our Sisters of the Quilt titles. ©2006 Cindy Woodsmall (P) 2008 Oasis Audio 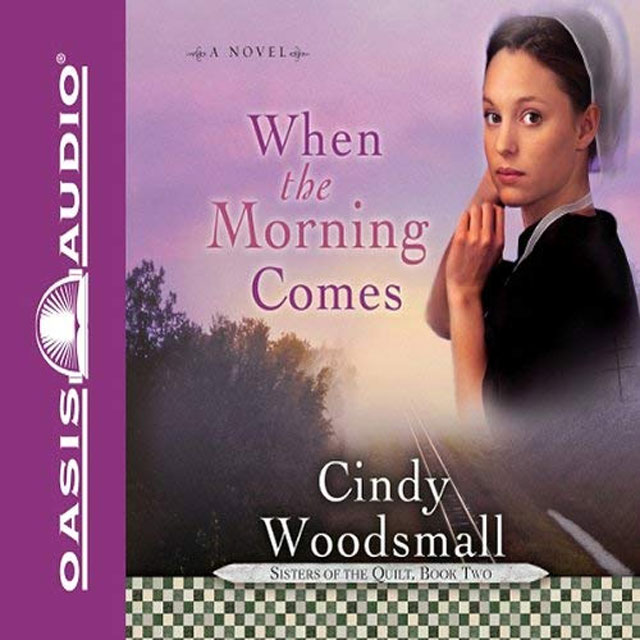 Sisters of the Quilt, Book 2

When the Morning Comes

Her relationship with fiance Paul Waddell in tatters, Hannah Lapp has fled her secluded Old Order Amish community in hopes of finding a new home in Ohio with her shunned aunt. Hampered by limited education and hiding her true identity, Hannah struggles to navigate the confusing world of the Englischers.
Back in Owl's Perch, Pennsylvania, Paul is wracked with regret over his treatment of Hannah. Fearing for her safety, he tries to convince Hannah's remaining allies - brother Luke, best friend Mary, and loyal Matthew Esh - to help search for his love.
Hannah's father, however, remains steadfastly convinced of her sinful behavior. His blindness to his family's pain extends to her sister, Sarah, who shows signs of increasing instability. Convinced her former life is irreparably destroyed, Hannah finds purpose and solace in life with her aunt and in a growing friendship with Englischer Martin Palmer. Will the countless opportunities in her new life persuade Hannah that her place is amongst the Englischers - or will she give in to her heart's call to return home and face her past? ©2008 Cindy Woodsmall (P) 2008 Oasis Audio

Sisters of the Quilt, Book 3

When the Soul Mends

After receiving a desperate and confusing call from her sister, Hannah Lapp reluctantly returns to the Old Order Amish community of her Pennsylvania childhood. Having fled in disgrace more than two years earlier, she finally has settled into a satisfying role in the Englischer world. She also has found love and a new family with the wealthy Martin Palmer and the children she is helping him raise. But almost immediately after her arrival in Owl's Perch, the disapproval of those who ostracized her, including her headstrong father, reopens old wounds.
As Hannah is thrown together with former fiance Paul Waddell to work for her sister Sarah's mental health, hidden truths surface about events during Hannah's absence, and she faces an agonizing decision. Will she choose the Englischer world and the man who restored her hope, or will she heed the call to return to the Plain Life - and perhaps to her first love? ©2008 Cindy Woodsmall (P) 2008 Oasis Audio